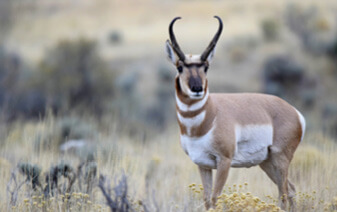 Minimum Legal Requirements For Taking Edible Meat From The Field

Hunters are encouraged to use as much of their harvest as possible. Although most meat from big game is edible, below are the minimum lawful requirements.

Helicopters and your Hunt

Each year, the Nevada Department of Wildlife conducts about 1000 hours of surveys with two Department helicopters to determine the productivity and distribution of wildlife species from mule deer to eagles. Wildlife surveys are essential to harvest regulation, and the Department strives to avoid conducting surveys during hunting seasons. Unfortunately, due to weather and demands associated with optimal survey timing, the Department sometimes must conduct surveys during seasons when a hunt may be ongoing. We are asking hunters to recognize that a survey may occur during any open hunting season, although the Department will do its best to reduce this to the extent possible.