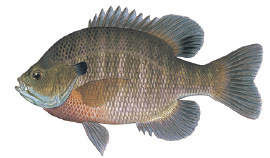 5 to 9 vertical bars on sides, black opercular flap (ear) with no margin, dark spot at rear of dorsal fin. 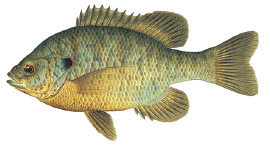 Opercular flap (ear) is tipped with red or orange margin. 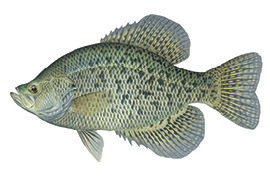 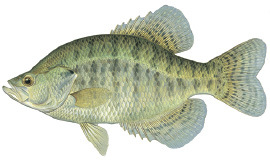 Upper jaw extends beyond back of eye.

Upper jaw does not extend beyond back of eye.

Red eye, horizontal lines of dark spots on lower sides, upper jaw does not extend beyond back of eye.

Two tooth patches on back of tongue are joined, first stripe below lateral line complete to tail, stripes above lateral line usually broken.

Single tooth patch on back of tongue, first stripe below lateral line not complete to tail.

Tooth patches on back of tongue in two parallel patches, first stripe below lateral line complete to tail, stripes above lateral line are unbroken.

3 or 4 saddle shaped blotches on back and sides, spotted dorsal fin.

Elongated body and head with tooth-filled mouth shaped like a duck bill; white belly with green to yellow sides featuring rows of lighter horizontal spots or streaks. Coloration can vary depending on habitat — light green from lake to dark green from river.

Caught a fish and need help identifying the species?

If you have caught a fish and cannot
determine what species it is, we can help. Email a photo of the fish to fishid@dnr.IN.gov. Visit fishing.IN.gov for more information.

Unless noted, all illustrations by Rick Hill, Kentucky Department of Fish & Wildlife.